Healthcare staffing agencies are seeing an uptick in demand as hospitals and nursing homes across the U.S. seek staff to help treat Covid-19 patients. One of the largest firms, AMN Healthcare, told the Dallas Morning News that it saw requests for nurses in New York City increase by 1,000% last month. San Diego-based travel nursing agency Aya Healthcare said it had filled 1,995 crisis jobs related to the pandemic as of Wednesday.

The U.S. has more than 199,000 known Covid-19 cases, with major outbreaks in New York City, New Orleans, Detroit, Los Angeles and Seattle, according to data from Johns Hopkins University. 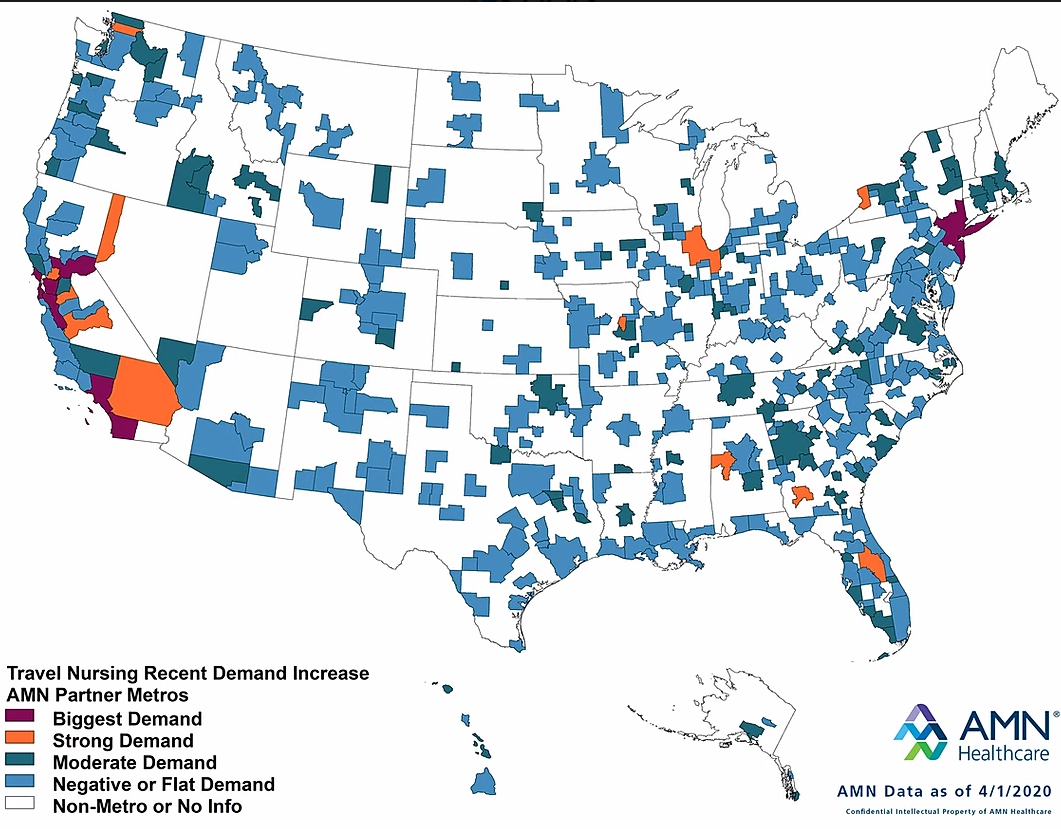 AMN Healthcare shared which regions had the most demand for travel nursing as of April 1.

But even as hospitals face a growing number of sick patients, staffing firms also said they’ve seen more nursing homes asking for help. Nursing homes and assisted living facilities are of particular concern with this outbreak, as older patients and those with chronic conditions are at the highest risk.

In Seattle, one of the first outbreaks started at the Life Care Center of Kirkland nursing home, resulting in 35 deaths. Since then, several other facilities across the U.S. have reported their own cases, with the Centers for Medicare and Medicaid Services reporting last week that 147 nursing homes across 27 states had Covid-19 cases.

“In a big sense, I think nursing homes are ground zero for Covid-19,” said Chris Caulfield, CEO of Intelycare, a Massachusetts-based agency that focuses on nursing homes and assisted living facilities. “These nursing home patients are at the most risk compared to anyone else in the country. We really need to train preventive practices to decrease the spread.”

Caulfield said Intelycare had seen demand for its services start picking up in early March. Since then, the company has increased the number of recruiters by 50%, as its 500 clients have asked for more help.

“We are very interested in increasing our workforce even faster than we have been in the past, for the necessity of coverage that we’ve run into at this point,” he said.

The company has rolled out a training course for its nurses to keep them up-to-date with how to reduce transmission, best practices for infection control, and what types of protective equipment are needed in different situations. It’s also making that training free to anyone who wants to use it.

One of the challenges, Caulfield said, is that skilled nursing facilities and nursing homes have limited resources. For example, they don’t have the negative air pressure rooms that can be used by hospitals for infection control, meaning different isolation precautions must be used in facilities that have a lot of sick patients.

Staffing shortages can also be a challenge, with many facilities already operating with relatively few nurses, stretched even further if some of them have to self-isolated after being exposed to the virus.

“The demand for additional staff (increases) once a healthcare facility has Covid-19, especially some of these smaller nursing homes. They have to put staff in a 14-day quarantine,” Caulfield said.

To reduce transmission, Caulfield said the company’s nurses are working at a limited number of facilities rather than traveling between several different ones. Intelycare also asks its clients on a daily basis if they have any confirmed Covid-19 cases at their facility. Nurses pre-screen before they show up to a facility, and self-monitor with temperature checks twice a day.

“We’re starting to see facilities have outbreaks of Covid-19,” he said. “We want to make sure we don’t continue the spread of this infection to other facilities.”

As of last week, Caulfield said he hadn’t seen many reports on shortages of personal protective equipment. But access to testing is a big issue.

“We’ve had so many weeks right now of not being able to get tested for nurses. … Local departments of public health so far haven’t been testing all nurses. They’ve almost been restricting it to ones with symptoms and individuals who have had direct contact for multiple days,” he said.

With a projected uptick in testing capacity, including Abbott Labs’ recently approved 5-minute tests, he was hopeful that more could receive testing soon.

“It’s exciting to hear about the new tests. The results should come back much quicker,” he said. “That should help with identifying individuals that can and can’t work.”

Build An Athletic Body With This Quickfire Home Dumbbell Circuit

An inside look at UnityPoint Health’s new partnership with startups

Natural Ways to Take Better Care of Your Skin