Digital health startups brought in record funding in the first quarter of 2020, according to Rock Health.

Digital Health startups raised a record-breaking $3.1 billion in the first quarter of 2020, according to a report released Monday by Rock Health. But now faced with a global pandemic, the trend is unlikely to continue.

Sean Day, research manager for Rock Health, said the historically large quarter was driven by activity that started before the Covid-19 outbreak.

“It also caps off the largest 12-month period for digital health funding that we’ve ever seen,” he said. “That said, we don’t think this very high-level funding is a good bellwether for what’s coming. Conditions have changed. This pandemic and the resulting economic downturn are all going to have a significant impact on the economy at large. Digital health companies are not going to be immune to that.”

Investors tended to prefer higher-value, late-stage investments, according to the report. The average deal sized jumped from $19.5 million last year to $29 million, and nearly a third of the deals were series C or later.

Interestingly, the majority of startups that raised funding focused on healthcare providers as their buyer or end user. Facing substantial financial hits from the Covid-19 pandemic, health systems may become more difficult to sell to in the future. 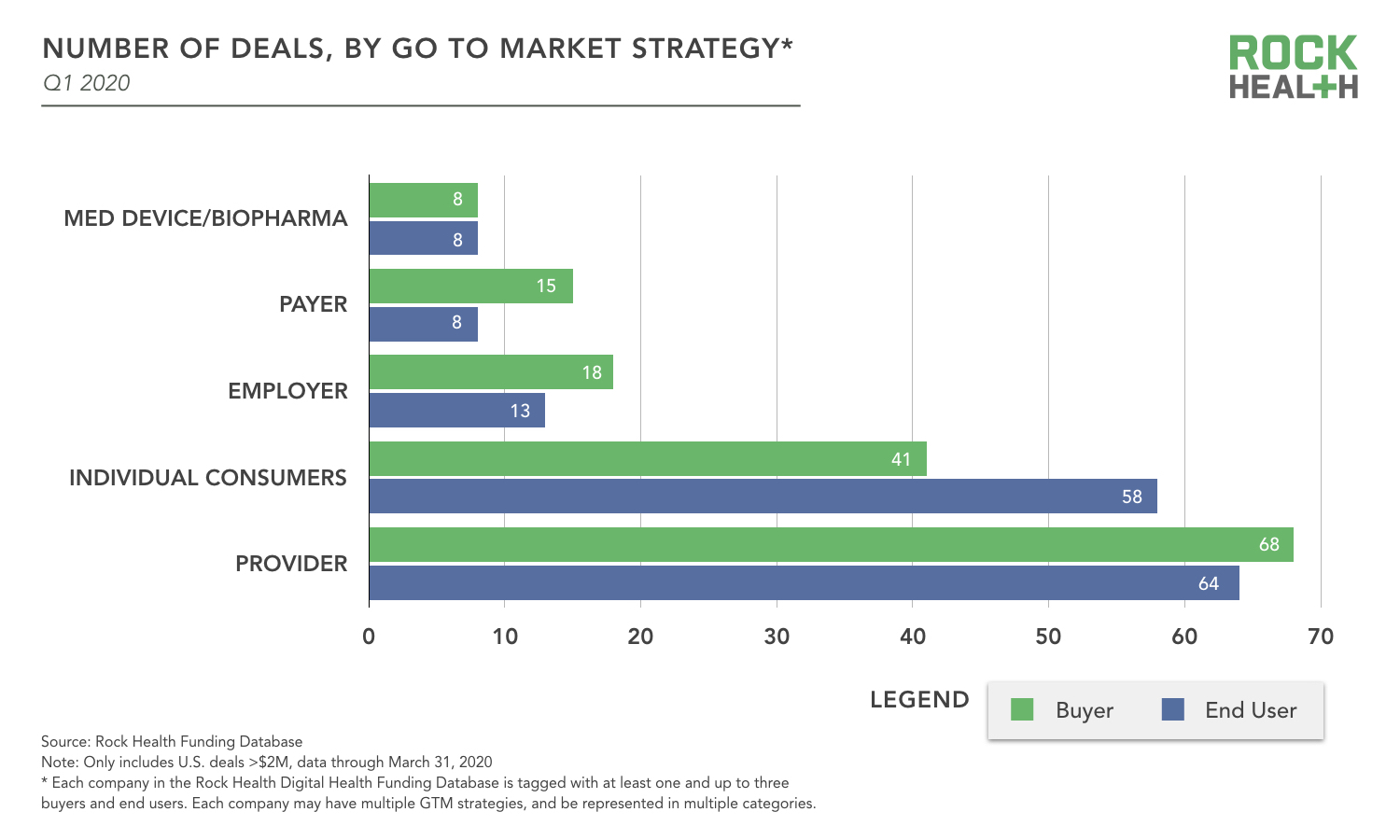 The majority of digital health startups that raised funding in Q1 were focused on marketing their product to providers.

Of the deals that Rock Health tracked, 68 focused on the providers as the buyer, while 41 were marketed to consumers and 18 to employers.

Director of Research and Marketing Megan Zweig said this creates a bit of a dichotomy for digital health companies right now. With the pandemic, hospitals and clinics are facing massive shortages in staff and protective equipment, leading them to turn to other solutions.

“They’re going to try to plug in whatever is easiest in trying to deliver healthcare at a distance – symptom triage tools, or telehealth,” she said. “Longer term, we’re going to have to see how this all plays out in terms of the financial impact on hospitals and health systems that already have very low margins. … Coming out of it, it remains to be seen if they’re going to be able to sustain partnerships with digital health companies, even though right now it’s mission critical.”

Despite all of these challenges, Zweig said she sees a couple of sectors doing particularly well. With several practices and patients turning to telemedicine during the pandemic, Zweig hopes it will lay the groundwork for sustained adoption.

“When you have providers and patients that are adopting telemedicine for the first time, hopefully they’re going to have a great experience,” she said.

Other types of telehealth, such as eConsults and chronic care management, may also have an edge.

As for what the investment landscape will look like later this year, it’s difficult to say at this point. Zweig’s hypothesis is that investors might choose later-stage, lower-risk bets.

“Not being able to meet in person, it does change the game. If an investor is going to decide between putting funding into one of their portfolio companies in a follow-on round, where it’s a known entity, versus a first time founder… they’re going to go with a sure bet,” she said. “I think they’re going to invest in companies that are later stage, have market fit, and a validated platform or solution that is already in the market. Any capital going into it is getting this ramped up to scale.”

Rock Health, for its part, focuses on seed-stage and series-A digital health companies. The company is actively investing.

“We’re finding ways to bridge this gap,” CEO and Managing Director Bill Evans said. “We’re going to find ways to support top notch founders and invest when it makes sense to do so. “