As with routine check-ups, most dental appointments have been put on hold to prevent exposure to Covid-19 and save much-needed protective equipment. The vast majority of dental practices, at 79%, have closed except for emergency procedures. Another 18% of dental practices have closed completely, according to the American Dental Association.

To make up for their losses, some practices have begun offering teledentistry. Health insurer Cigna also struck a recent partnership with the TeleDentists, a company that offers virtual dental consults.

The idea of teledentistry can be a bit puzzling. What can dentists treat over a screen? According to Cigna, the video consults can be used to diagnose causes of pain and swelling, and answer questions about a chipped tooth or a loose crown. If needed, the dentist could prescribe antibiotics or non-narcotic pain relievers.

Cigna had originally planned to roll out the dental virtual care service in the third quarter, but fast-tracked the program in light of the pandemic. Cigna plans to offer the service for free until May 31. The TeleDentists has more than 300 dentists in its network.

While teledentistry and emergency appointments can help fill some of the gaps, they can’t sustain dental practices for long. Most dental practices are seeing less than 5% of the volume that they would typically see, according to the ADA. 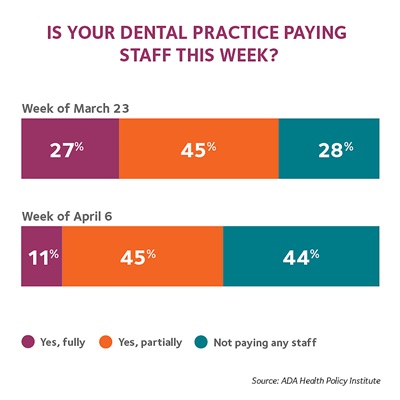 The number of dental practices that are paying their staff has decreased sharply in two weeks, according to the American Dental Association

“Short-term financial relief from the Coronavirus Aid, Relief, and Economic Security Act, dental insurers and other groups as well as the enhanced use of teledentistry could help ease financial shortfalls in the short term,” Marko Vujicic, chief economist and vice president of the ADA’s Health Policy Institute, said in a statement. “What is clear at this stage, however, is that the coming two to three months represent a critical juncture for the economic sustainability of many dental practices.”

STICKING TO A HEALTHY LIFESTYLE (5 tips to stay on track)